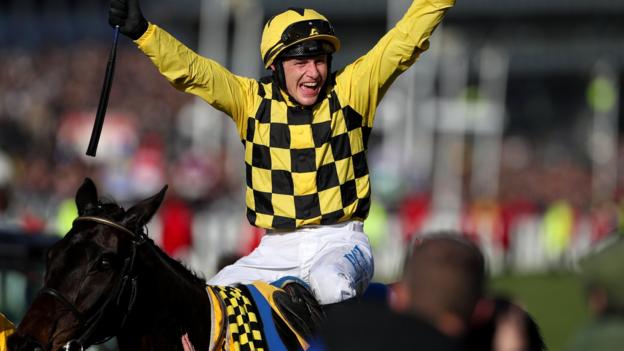 The 10-3 favourite, ridden by Paul Townend, jumped the fourth and third-last fences superbly to move into contention in a keenly contested race.

He got in a great position coming down the Cheltenham hill and held on to beat Santini (5-1) by a neck.

Lost In Translation (10-1) was third, ahead of Rachael Blackmore’s Monalee.

A thrilled Mullins said after the race: “It’s a fantastic, absolutely unbelievable day. That man there on the screen, Paul Townend, people said he was under pressure.

“Paul does his own thing. He probably rides better under a little bit of pressure. [It was] really, really good from him.

“[I’m] delighted for Paul. It’s not easy to take over from someone like Ruby Walsh, but Paul’s gone and stamped his authority on this season in Ireland riding for our yard.”

Townend added: “I thought I would never feel anything like the feeling I had here last year, but I think this is even better. It’s unreal.

“To be honest, I just went out with the plan of getting into a rhythm like last year. We’ve missed a few fences but he’s always found his feet, and it just happened again at the top of the hill.

“He was jumping a bit better and I ended up in front a bit sooner than I wanted, but I was able to hang on there and produce him when I needed him at the last. He’s a tough animal.”

Al Boum Photo’s success sees him follow the great Best Mate, who won the race three times between 2002 and 2004 and ensured Townend finished as the meeting’s leading rider with five wins.

The win capped a magnificent afternoon for Mullins and Townend, who had earlier combined for two victories.

They were beneficiaries of a huge slice of luck in the opening JCB Triumph Hurdle, when Goshen unseated rider Jamie Moore at the last hurdle when leading comfortably.

Moore, who was riding for his father Gary, came to the last with the race at his mercy but after the horse took a slight stumble, Moore fell from his mount.

It allowed Burning Victory (12-1) and Townend to take their opportunity and they won by two-and- three-quarter lengths.

Mullins said: “I just feel very sorry for Gary and Jamie. Jamie did everything right and rode the perfect race. He had the race in the bag and asked the horse all the right questions at the last, but the horse didn’t answer and he just got unbalanced.

“It’s not a victory I’m going to celebrate hugely – we got the rub of the green.”

Things were slightly more straightforward for the pair in the Albert Bartlett Novices Hurdle as Monkfish (5-1) edged out Latest Exhibition by a neck with Fury Road a nose away in third.

Owner Rich Ricci said: “It was unbelievable. He has got a bit of class about him.

“He is definitely a chaser. We bought him as a Gold Cup horse. Hopefully fingers crossed he stays healthy and he can grow into one.”

In between, it was Barry Geraghty who rode his fifth winner of the week when the Mullins-trained Saint Roi (11-2 fav) took the Randox Health County Hurdle with the stable also finishing second and fourth through Aramon and Buildmeupbuttercup.

It brought Mullins to seven wins and although Gordon Elliott also finished on seven and the pair were also level on second places, Mullins won the leading trainer award for his six third places, two more than his rival.

Paul Townend has been part of the set-up at Willie Mullins’ operation since schooldays, so he’s no new kid on the block, but this result is still important for him, showing everyone just how effortlessly he’s slipped into Ruby Walsh’s boots at the stable.

And in what close – and thrilling – style. Al Boum Photo’s preparation again involved just one race at otherwise fairly unheralded Tramore in south-east Ireland, and it’s no surprise Mullins is already plotting the same route for 2021 when the horse will attempt to do what four of the other six back-to-back winners have achieved, and win a third.

Analysis and opinion from our horse racing correspondent

All the meetings scheduled in the United Kingdom

How to get into horse riding, whether you want to work with horses at the stables or become a fully fledged jockey.

Latest updates and video from the world of equestrian sports