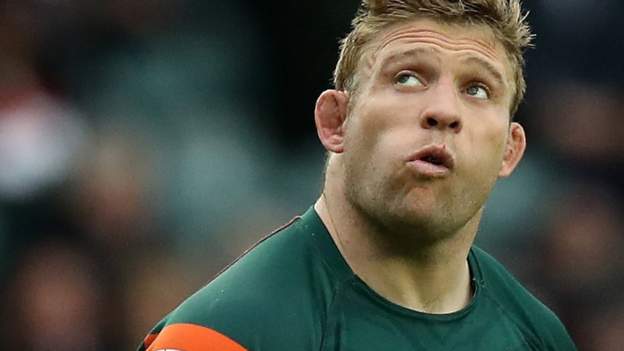 Sale came from behind to beat Leicester as new director of rugby Alex Sanderson got off to a winning start.

Tigers built an early 8-0 lead when Zack Henry’s penalty was followed by a try for flanker Tommy Reffell.

But Sale were ahead by the break when AJ MacGinty converted Sam James’ try and also kicked a penalty.

Cobus Wiese and Marland Yarde stretched the visitors’ lead and, although Nemani Nadolo got a second Tigers try, kicked by Johnny McPhillips, Sale saw it out.

They missed out on a four-try bonus point but did enough to climb above Newcastle into second in the Premiership.

In fact it was Sale who blew their chance of adding an extra point when they fumbled five metres from the line.

While Youngs’ try for Leicester came on his 200th appearance, fellow forward Wiese’s try for Sale came on a night when he was up against elder brother Jasper for the first time in their careers.

He cashed in on his side having an extra man early in the second half after lock Harry Wells had been sin-binned for an infringement defending his own line.

After Yarde had caught and finished MacGinty’s wonderful cross-field kick to put his side two converted scores ahead entering the final quarter, Tigers were again a man down, this time Nephi Leatigaga, when MacGinty made Sale’s win safe with his fourth successful kick of the evening.

“They’re a top-four team. We aspire to do the things to lift us back up the table and we’ve still got plenty to do. Our kicking needs to be better and we just need to finish off more of our chances.

“We dominated a lot of possession in the first half which we didn’t turn into points and gave them an interception try.

“We then made a terrible start to the second half with needless penalties and a sin-binning and suddenly we were 17-8 down – and it made it very hard to get back into the game.”

“Winning generally comes as an outcome of getting all the other bits right. If we got some transference from how we trained, and what we talked about, even just glimpses of it and give us things to build upon and anchor all the hard work we’ve done, I’d have been happy.

“So to get the win on top of that is a bonus, and a good one. But let’s not get carried away, it’s just the start, it’s just a good start.

“We knew we had to win that territory battle. We didn’t do that in the first half. The stats were 70-30 to them. It was an easy fix. We were good defensively. Let’s use that as a weapon. What can we do better? Play in the right areas. We just identified a few things which helped us do that.”