Swing Low, Sweet Chariot: RFU will not ban song but will educate fans on song’s history 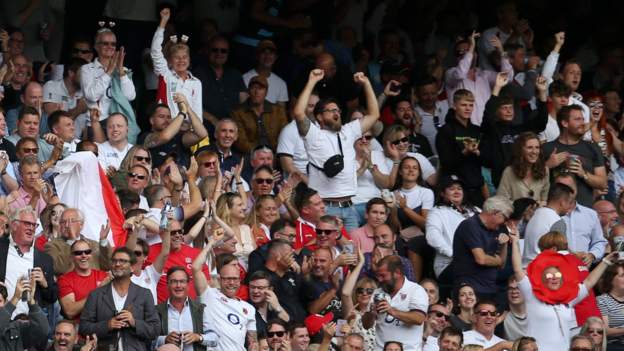 The Rugby Football Union will not ban ‘Swing Low, Sweet Chariot’ but will “proactively” educate fans on the song’s “history and provenance”.

In June, the governing body said it would review the song’s use by England fans because of its links with slavery.

It has announced it will use social media to educate supporters in addition to “providing platforms for diverse voices across the game”.

It comes as part of its commitment to improving diversity and inclusion.

“The RFU needs to step up its efforts to improve diversity and inclusion across our game,” said RFU chair Andy Cosslett.

“We are living through testing times, but this will not deter us from grasping the opportunity to better reflect the society we live in.

“We have worked hard to understand our starting point and are now under way with a plan that we are confident will produce big improvements in our diversity and inclusion over the next few years.

“Rugby union has always prided itself as being a ‘game for all’… we must now demonstrate beyond any doubt that we mean it.”

Former rugby league and union wing Martin Offiah, who was playing during the song’s first known use at Twickenham in 1987, welcomed the RFU review but also did not want it banned.

The RFU says it will release a short form documentary on the song’s history which will feature current and former BAME England players.

It comes after new research by the RFU found that only 31% of respondents believe rugby is representative of the general population, while followers of the game are less likely to be female or of a black, Asian or minority ethnic (BAME) background.

It also said it would support the message of the Black Lives Matter movement and Rugby Against Racism, and will support players and officials who want to make gestures at future games.