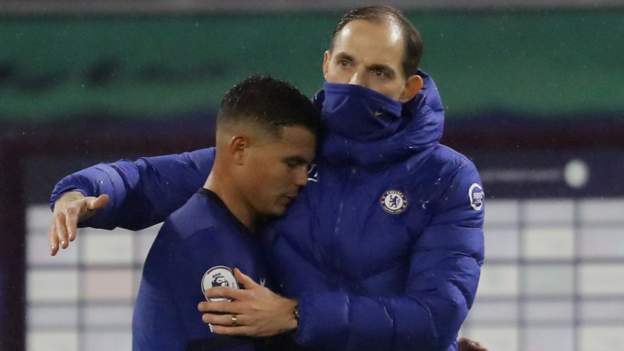 The Thomas Tuchel era at Chelsea may have started with a goalless draw, but the German believes he has seen enough to leave him feeling positive about the future.

Tuchel’s side were held on a frustrating night by Wolves at Stamford Bridge in the former Paris St-Germain and Borussia Dortmund boss’ first game since taking over from Frank Lampard.

Chelsea have won just once in six Premier League games and are five points off a top-four spot.

But Tuchel preferred to concentrate on the positives after the Wolves match.

“I was very happy performance-wise, unfortunately we couldn’t score, if we take care of our performance like this the results will come,” he said after taking charge of Chelsea for the first time.

“It gives me a good feeling for the future.”

So were there signs of what is to come under Tuchel and any early positives?

It’s not very often a striker is dropped to the bench after scoring a hat-trick.

But that is what happened to Tammy Abraham after Tuchel opted to go for “a bit more experience” for his first game.

Mason Mount and Reece James also had to start on the bench as the likes of France World Cup winner Olivier Giroud and Jorginho got the nod.

Tuchel, who has conducted one training session with his new team, said: “We have a good mix of young and experienced players.

“Today I cannot choose a team after one day in training, it’s not fair so this may be the most unfair line-up we ever do.

“We chose a bit more experience because we step into the middle of the season, it’s not easy.”

In total, the Blues let in 77 goals in 57 league games under the former England midfielder’s command.

Despite failing to collect maximum points against Wolves, a clean sheet in Tuchel’s opening game will be viewed as a positive.

Wolves were limited to just four attempts – none on target – as Rudiger and Thiago Silva helped keep it tight at the back.

“We had a clear idea to start with three at the back to help defend against the two fast strikers, so we didn’t have a situation where we slipped up or allowed an easy counter-attack,” added the German.

The Premier League already has several animated managers. Liverpool’s Jurgen Klopp and Manchester City’s Pep Guardiola are just two. Tuchel is another who likes to express his feelings on the touchline.

At one stage he threw his arms in the air after Hudson-Odoi clipped a cross to the back post only for Ben Chilwell to put it wide.

He repeated the gesture in the second half when Chilwell fired another chance over the bar and Mateo Kovacic went close from long range.

During a break in play, while a Wolves player received treatment for an injury, Hudson-Odoi went over to get a bottle of water and ended up deep in conversation with Tuchel.

Hudson-Odoi was industrious throughout in what was only his fourth Premier League start of the season.

The 20-year-old thought he had won it towards the end but his deflected shot was saved by Patricio.

“Callum was the key on the side with his speed and confidence,” said Tuchel.

Lampard had been reluctant to start the player towards the end of his reign, but Hudson-Odoi showed why he has been targeted by Bayern Munich.

Will he prosper under Tuchel?

As well as getting Chelsea winning again, Tuchel has been brought in to get expensive signings Kai Havertz and Timo Werner firing.

Havertz, a £71m signing from Bayer Leverkusen in September 2020, played the full 90 minutes and went close to scoring with the last touch of the game following a corner.

With just five Premier League goals between them, Tuchel will be hoping his arrival can inspire his fellow Germans.

Asked what needs to change at Chelsea, Tuchel said: “Not much. I see a very demanding league that brings out physically everything in every player.

“I’m used to creating the special energy and atmosphere you need to create the possibility to win every three days in a league like this.

“And I believe we can do this on a daily basis.”

Check into the chilling Bates Motel to find out…

Check out the great selection on BBC iPlayer