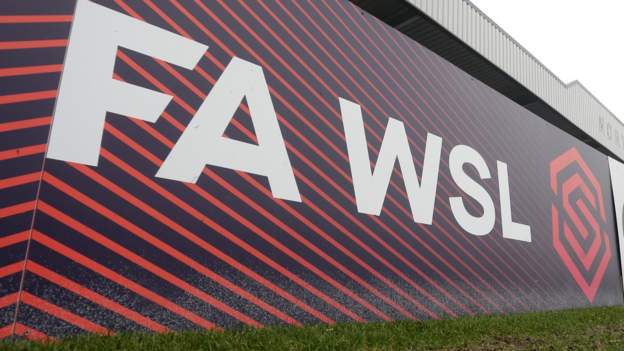 Chelsea set a new Women’s Super League record of 32 games unbeaten with a victory at Aston Villa that sent them back to the top of the table.

Pernille Harder then drove a low shot into the bottom corner and Magdalena Eriksson slotted a fourth.

Hayes, who has won the WSL three times as Chelsea boss, described the new record as “a moment to recognise how lucky our club is to have such a wonderful team full of amazing humans”.

“Together we have made some special memories,” she addedexternal-link after her side’s eighth straight win.

Chelsea, who last tasted defeat at Birmingham City in January 2019, have moved above Manchester United on goal difference with a game in hand.

In stark contrast it proved a tough first game in charge of Villa for interim manager Marcus Bignot, with England’s curling shot also clipping the bar in between the two first-half goals as the visitors dominated possession.

Villa are winless at home this season in their first WSL campaign, but defended resolutely to keep the reigning champions at bay until their resistance was broken as Harder’s first away goal for Chelsea sparked a quickfire double.

They have chalked up 25 wins in that incredible 32-match unbeaten streak, a record which earned them a third league title in a truncated 2019-20 season and has put them in pole position to defend their crown.

They have defeated both of their Manchester title rivals this season and reached the halfway point of the season by dropping just four points from 11 matches to sit top.

“This team will go down in history, I’m certain of it,” Hayes told Chelsea TV.external-link “I know when you’re winning a lot there’s just this expectation you’re going to keep doing it, but this is the best Chelsea team I’ve ever had.”

Attempt missed. Beth England (Chelsea Women) right footed shot from outside the box is too high. Assisted by Sophie Ingle.

Attempt missed. Stine Larsen (Aston Villa Women) header from the centre of the box is high and wide to the right. Assisted by Natalie Haigh with a cross.

Mana Iwabuchi (Aston Villa Women) wins a free kick in the defensive half.

Stine Larsen (Aston Villa Women) wins a free kick in the defensive half.

At some point the past has to die… doesn’t it?