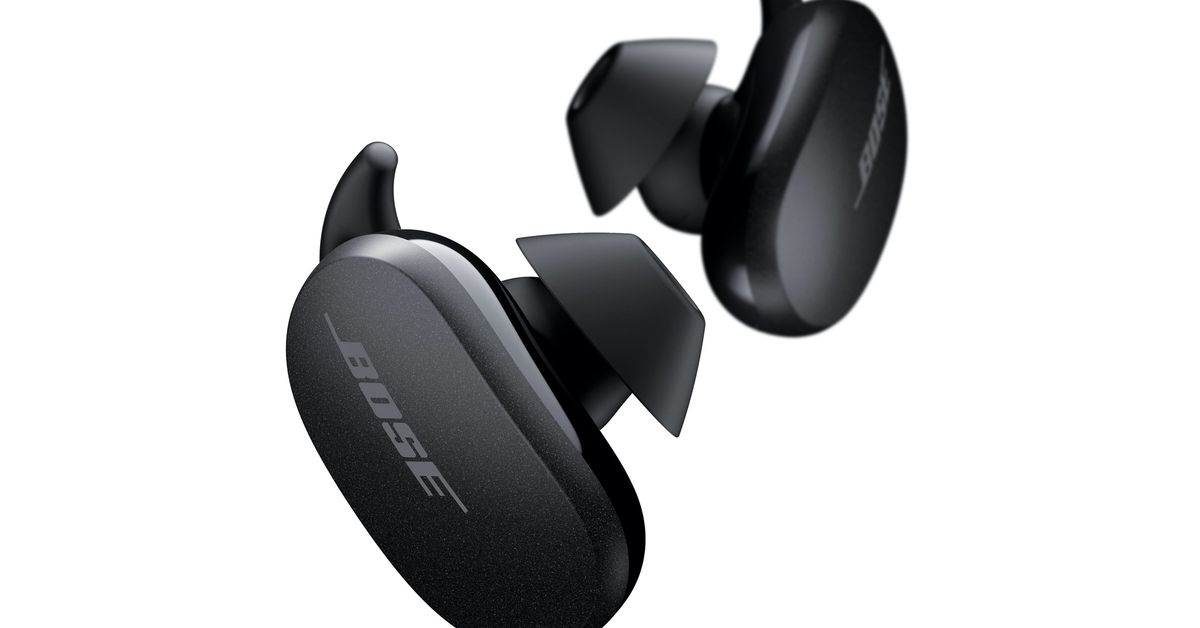 Bose is ready to reenter the competitive true wireless earbuds market with two new products. Today, the company is announcing both the noise-canceling QuietComfort Earbuds, priced at $279, and the $179 Sports Earbuds. (They were previously known as the Noise Canceling Earbuds 700 and 500, respectively.) With the flagship QuietComfort Earbuds, Bose is promising to deliver “all the ‘quiet’ of Bose around-ear headphones” in a truly wireless form factor. As for the Sports Earbuds, essentially a successor to 2017’s SoundSport Free, Bose says they’re designed for comfort and stability through even the most vigorous, intense workouts. Both will be available on September 29th, with preorders starting today.

So in one fell swoop, Bose is trying to take on the AirPods Pro and Sony’s 1000XM3 earbuds with the QuietComfort Earbuds, and the Sports Earbuds will compete with lower-cost options like the Jabra Elite 75t and Samsung Galaxy Buds Plus. (The Sports Earbuds don’t have any kind of noise cancellation.)

But the QuietComfort Earbuds sure do. You can choose between 11 levels of noise cancellation, according to Bose. That level of granularity isn’t unusual to see in noise-canceling headphones, but it’s a little rarer to find in earbuds. Each earbud is slightly over an inch long and weighs 0.3 ounces — “about the same as a quarter,” according to Bose. The ear tips have been redesigned with more of an oval shape, which apparently makes for a better seal. That improve noise isolation is combined with “an exclusive new algorithm” that produces an opposite signal to outside noise in under a millisecond.

The result? “The buzz of nearby coffee grinders fade to a whisper, and the roar from engines and construction all but vanish.” Again, these are big claims when you remember we’re talking about earbuds. But Bose has decades of experience in this area and a long, long list of patents around noise-canceling tech. I’m excited to see if the experience matches the marketing speak. The 11 levels of noise cancellation run the gamut from full transparency to fully muting the world around you. In my tests so far, no company has managed to beat the natural-sounding transparency mode of the AirPods Pro.

As for sound quality, Bose says the QuietComfort Earbuds avoid boosting any particular frequencies and go for a “faithful reproduction” of your music, though the company says bass is “rich and strong at any volume.” Bose says there’s no “electronic hiss” when watching videos or listening to podcasts; some true wireless earbuds can produce audible, even annoying levels of white noise, but it’s not an issue for Bose’s primary competitors.

Battery life is decent. The QuietComfort Earbuds can hit up to six hours of continuous listening and get another 12 from their carrying case, which supports wireless charging. Six hours is right on par with the AirPods Pro and Sony’s 1000XM3 buds, though the latter two have more juice in their cases. The QuietComfort Earbuds will be available in either black or “soapstone,” which is basically an off-white / silver color.

The Sports Earbuds were “engineered from a clean sheet” according to Bose — the previous SoundSport Frees sounded great but had some connectivity and audio sync issues — and feature “an entirely new acoustic system.” The company says you can expect powerful, motivating audio for your workout playlists, but the Sports Earbuds are more about fit and comfort. They have an “almost-magical defiance to shift or fall out,” which is one of the most perfect, only-Bose-would-say-something-like-that things that I’ve ever heard. The Sports Earbuds come in black, white (with green accents), and blue.

Their continuous battery life is a little shorter at five hours. The case adds 10 more and lacks wireless charging. Both the Sports Earbuds and QuietComfort Earbuds are rated IPX4 for water and sweat resistance, so the fitness-geared buds don’t have any advantage there; again, it seems to be more about fit and a design that won’t cause any discomfort in the middle of a lengthy run.

Bose says both pairs of new earbuds have Bluetooth 5.1 “and a new data transfer method for fewer dropouts.” And they’ve got “on-bud touch controls for the most common commands like play and pause, answer and end calls, and access to your personal assistant.” I’m not thrilled that volume goes unmentioned there, but hopefully it’s an option. Both sets of buds also have auto-pause. With the QuietComfort Earbuds, you can remove either earbud and your music will pause until you put it back in. With the Sports Earbuds, only the right earbud has this auto-pause detection. One disappointment? Neither pair — even the $279 QuietComfort Earbuds — offers multipoint, which means you can’t simultaneously pair to two devices at once. That’s an advantage that Jabra gets to hang over its rivals. Bose is very good at multipoint with headphones, so I wish it could’ve made the same happen with earbuds.

Even so, after an oddly long delay, Bose has come back with a focused strategy. If the company can leverage its know-how and indisputably beat Apple and Sony at noise cancellation, that’ll be enough to sell plenty of QuietComfort Earbuds all by itself — even if most of us aren’t boarding many flights right now. As for the Sports Earbuds, those also come down to how well Bose can deliver on its promises. This company knows how to make comfortable earbuds; there are still people out there who miss the discontinued Sleep Buds. But that $179 price level is where I think Bose will have a harder time differentiating itself. Stay tuned for my reviews of each in the coming weeks.