Cameron Green: Australia A all-rounder hit on head while bowling 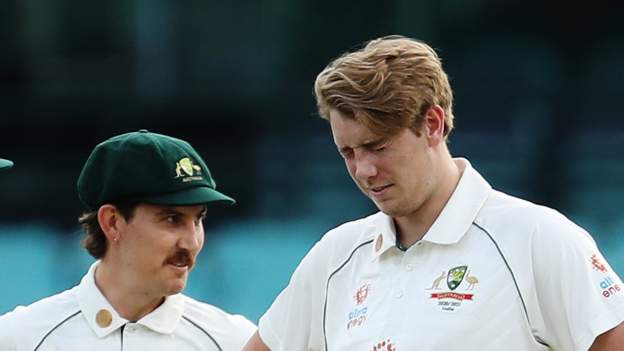 All-rounder Cameron Green became the second Australia A player in four days to be ruled out of a Test warm-up game after being struck on the head.

A powerful drive from India’s Jasprit Bumrah burst through Green’s hands in his follow-through and struck the side of his head on the opening day of the three-day tour match in Sydney.

On Tuesday Will Pucovski retired hurt after being struck while batting.

The opener was hit on the helmet by a bouncer. He suffered “mild concussion symptoms” and was ruled out of the second warm-up game at the SCG.

Green and Pucovski have been tipped to make their Test debuts on Thursday in the first Test against India.

Green sat on the pitch and was examined by the Australia medical team before walking from the field for further assessment.

Cricket Australia said he had been withdrawn from the match and will continue to be assessed.

Green made 125 not out in the first warm-up game to press his claims for a Test debut.

He averages 72.6 in the Sheffield Shield this season, with a highest score of 197, and made his Australia one-day debut against India last week.

Analysis and opinion from the BBC’s cricket correspondent.