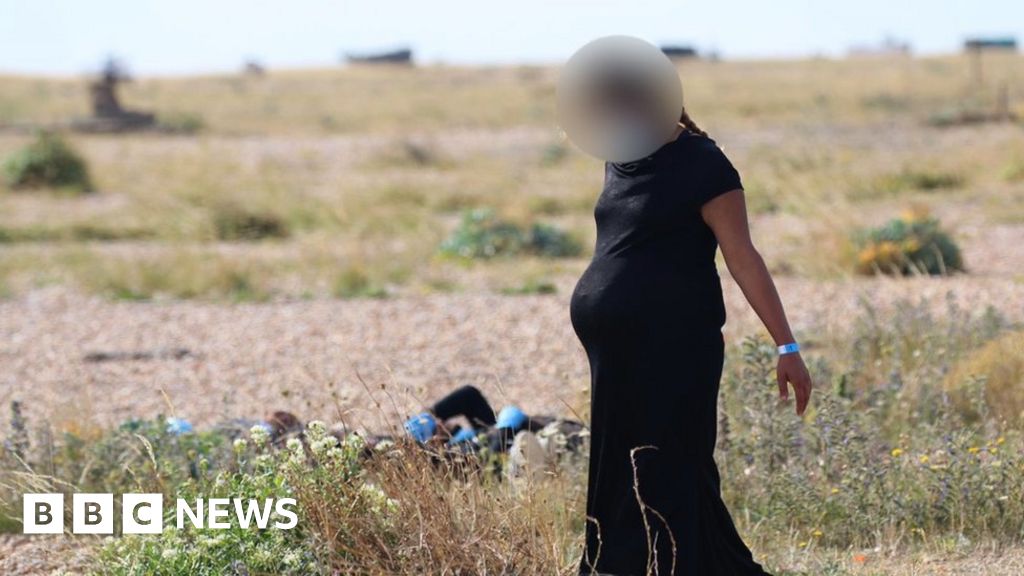 A total of 235 migrants were intercepted crossing the English Channel on Thursday, the Home Office confirmed – a record for a single day.

Among them was a group of 15, including children and a heavily pregnant woman, that landed on a beach in Kent.

In total, 17 vessels were apprehended by The Maritime and Coastguard Agency and Border Force units.

On Friday, at least 130 people in 13 vessels were brought to the UK, the Home Office said.

At about 20:20 BST it said that Border Force was continuing to deal with “a number of ongoing incidents”.

Why are migrants crossing the English Channel?

BBC reporter Simon Jones said a kayak and other inflatable vessels had also been reported heading towards the Kent coast.

Including Thursday’s total, 3,948 people have crossed the Channel in more than 300 boats so far this year.

The Home Office has not been able to supply a breakdown of genders or nationalities of those who were intercepted on Thursday.

Minister for Immigration Compliance and the Courts Chris Philp said he shared “the anger and frustration of the public at the appalling number of crossings” on Thursday.

We took to the sea at 04:00 BST – and shortly after sunrise on Friday the eagle-eyed skipper of our fishing boat spotted something on the horizon.

Motoring toward us is a boat carrying 17 people. They told us they were from Iraq, and there was a pregnant woman on board, along with several children. They were trying to reach Kent.

The Coastguard asked us to shadow them as the Border Force was busy dealing with other boats and kayaks in the Channel.

But after an hour, with the White Cliffs in sight, there was a problem – their engine broke down.

Another Border Force boat though was already en route to pick them up and take them to Dover. As they stepped foot on British soil, they had achieved their goal.

One of the vessels was carrying 26 people.

In one incident, Border Force officers apprehended 15 migrants who had landed at Dungeness beach on Thursday.

Eyewitness Susan Pilcher told the BBC she had seen three family groups – including a woman who appeared to be heavily pregnant – as well as two single men.

The French authorities said they had also rescued migrants from several kayaks in their own waters as they headed for the UK.

A helicopter was used in the response that saw at least 23 people intercepted and brought back to France.

Thursday’s figure breaks a record set only a week ago, when 202 people crossed in 24 hours.

Mr Philp said: “The crossings are totally unacceptable and unnecessary as France is a safe country.

“We work closely with France and I will be in Paris early next week to seek to agree stronger measures with them, including interceptions and returns.

“This situation simply cannot go on.”

He said the only option was to make the route “completely unviable” to deter people from attempting it.

Regarding reports the Navy could be used to patrol the Channel, Chancellor Rishi Sunak told Sky News: “I wouldn’t want to speculate on exactly what measures will be put in place.

“It’s important that we work closely with our French allies on this situation.

“Obviously France is a safe country for migrants to be, we all want to see these crossings reduced and, pending the outcomes of those conversations [in France] we can decide on the best next steps to take.”

Number of people reaching the UK each month since July 2019

An inquiry has been launched into the reasons behind the huge increase in Channel crossings by migrants.

Among the areas the home affairs committee will examine are:

Sending more than a million students back to university could spark second Covid wave, say lecturers.

No Place But the Water: The eerie new drama