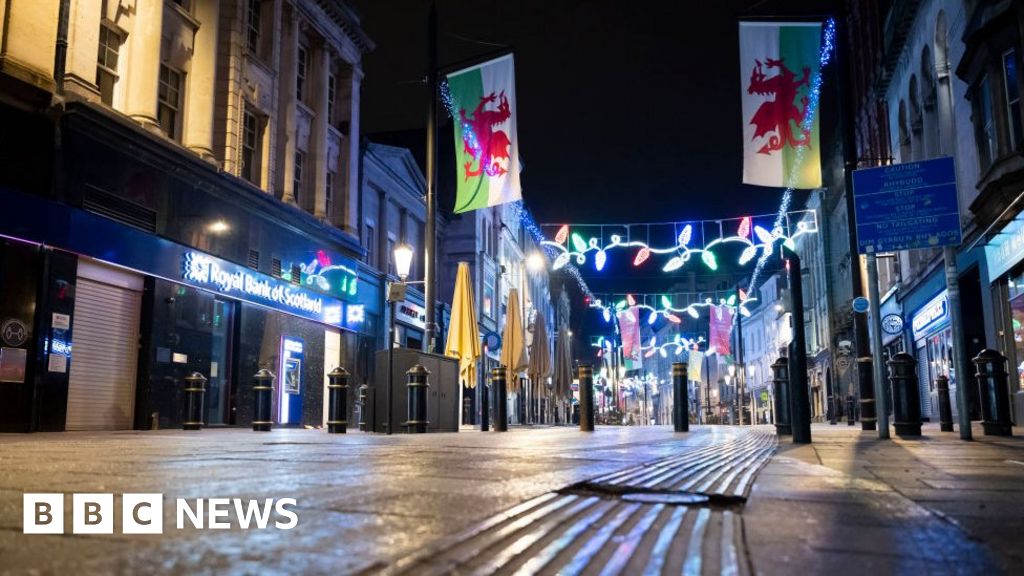 .css-14iz86j-BoldText{font-weight:bold;}A post-Christmas lockdown will come into force if Covid cases do not begin to fall, the first minister has warned.

Restrictions will be relaxed for the festive period but there is pressure for tougher rules from 28 December with more than 1,900 in hospital.

Mark Drakeford said that while stricter rules were not a “foregone conclusion” the NHS will “not be able to cope” if admissions continue to rise.

Outdoor attractions in Wales have been told they must close from Monday.

The Welsh Government said the measure includes funfairs, and venues such as trampoline parks.

It means attractions such as Swansea’s Museum Park Christmas event, with a big wheel, rides and games stalls, will be shutting from Saturday, say its organisers.

But other events, such as Christmas shopping markets across Wales will remain open – though carousel and fun rides in these locations will also have to shut.

Welsh Conservatives said responsibility for the current situation rests on “the shoulders of the Welsh Labour-led Government”.

Next week the Welsh Government will publish a “Covid control plan” laying out four alert levels of restrictions that could be imposed.

At the highest level – level four – restrictions would be imposed that are equivalent to a lockdown.

Mr Drakeford told a press conference it would be “inevitable” Wales would move to level four after Christmas if the measures taken recently and “the efforts of each and every one of us do not succeed in turning the tide of the virus”.

Under the four alert levels

The first minister suggested that level four restrictions would be Wales-wide but, in future, different areas of Wales could move to different levels.

He warned that any new lockdown would not be for a fixed period of time, as weth the firebreak in October and November, but would be reviewed “on a regular cycle” and would be extended if needed.

The plan, to be put to the Senedd on Tuesday for debate, would set out how it would be possible to have more than one alert level in Wales if “some parts of Wales established themselves in a reliable… and sustainable way as having a different level of the virus”.

But he said Wales was not in that position now with the situation being “very serious” across the whole of the country.

“In some parts of Wales, such as Neath Port Talbot, Blaenau Gwent and Rhondda Cynon Taf, the rates are now incredibly high,” he added.

Mr Drakeford also warned there could be as many as 2,500 people with coronavirus in hospitals by Christmas Day, if the increases in admissions continue.

“Our NHS will not be able to cope if we continue to see this level of coronavirus-related admissions in the coming weeks, on top of the normal winter pressures,” he said.

Under level four, Wales would see restrictions similar to the spring lockdown, with people told to stay at home but with schools and colleges and places of worship remaining open.

There would be no extended household bubbles, except for single adults who could form a support bubble with one other household.

No-one would be allowed to meet people outside their household or travel without a reasonable excuse.

Non-essential retail would be shut, but with click and collect allowed.

Public parks would be open and wedding ceremonies could take place, but receptions and wakes would not be allowed.

In Bridgend, car dealer Nathan Griffiths wants to put 2020 behind him, and look forward to 2021.

But the potential for a new lockdown after the Christmas break could dampen those hopes.

“As an employer, January is normally a really busy time for us,” he said.

“We’re even looking, if this announcement goes through, that we actually just furlough everybody and close for January.”

It would hit the 100 staff they have across three sites.

They had been hoping to expand the business in 2020 to a fourth site.

Instead, it could now mean reducing the sites to two.

“I think the uncertainty is the hardest thing,” he added.

Andrew RT Davies, Welsh Conservative health spokesman, said: “The First Minister’s announcement today set out the bleak landscape before the people of Wales in relation to Covid infection rates and the huge pressure our NHS is under.

“Much of the responsibility for the current situation sits on the shoulders of the Welsh Labour-led Government for the poor decisions they have taken up until today.

“As Welsh Conservatives, we stand ready to work with the government here to bear down on the virus and regain control of the situation”.

Plaid Cymru health spokesman Rhun ap Iorwerth said: “You’ve only got to look at the trajectory that we are on, certainly for Wales as a whole, to see that if things don’t improve it’s very, very likely we will need tighter restrictions.”

He agreed with the idea of acting in a “regionally sensitive way” and said his own Ynys Mon constituency currently had low case numbers, but had seen larger outbreaks earlier in the year.

“The problem with a fully national system is you are perhaps trying to balance what’s effective in areas of high prevalence with what’s acceptable in areas where it’s very low,” he said.

.css-q4by3k-IconContainer{display:none;height:1em;width:1em;vertical-align:-0.125em;margin-right:0.25em;}playCovid: Wales lockdown ‘inevitable’ if cases do not fall

Covid: Limit reached on government ‘telling people what to do’

The PM’s agreement is on its way to becoming law after the Commons approves it by 521 votes to 73.

Oxford-AstraZeneca vaccine approved for use in UK

A decision that changed my family’s story

‘Finally, these clothes look like they’re meant to be worn’

‘Iraq’s ghost militias have got me on their hit-list’

Striking news photos from around the world in 2020

The tragedy of the tuk-tuk driver who fled Covid

Covid-19: Oxford-AstraZeneca vaccine approved for use in UK5