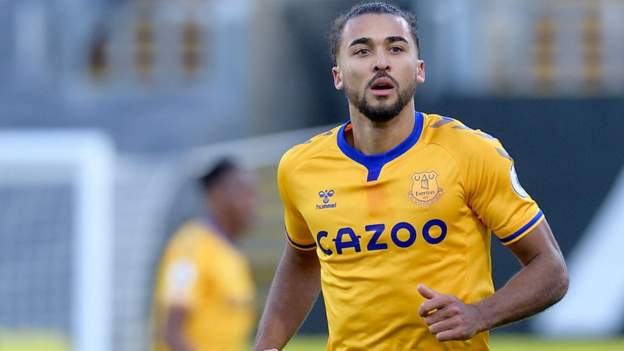 That woke up Frank Lampard’s side who then drew three saves from Jordan Pickford, one of which saw the goalkeeper brilliantly tip Reece James’ shot onto the post.

Mason Mount also hit the woodwork for the visitors after 81 minutes, yet they struggled to find the fluidity which has seen them tipped as title challengers this season.

That was in part down to some fine Everton defending, but Ancelotti’s side also had good chances, with Richarlison twice having shots saved and Yerry Mina wasting two headers.

“The fans made a lot of difference, it was a total different atmosphere,” said Ancelotti, whose side ended a run of one win in seven games, without the injured James Rodriguez, and move up to seventh in the table.

“We only had 2,000 fans, but it made me happy, and I hope the stadium will be full as soon as possible.”

Chelsea’s second defeat of the season meant they were denied the chance to go top and remain third.

The last time Everton’s fans saw their team in the flesh was back in March when they were thrashed 4-0 by Chelsea at Stamford Bridge.

And having missed out on a start to the season which saw the Toffees top the table after five games, they were unable to see summer signing Rodriguez in action because of a calf injury.

But those lucky enough to get a ticket saw the growing influence of top scorer Calvert-Lewin, who demonstrated his aerial presence by controlling a long ball with his head before being clattered by Mendy in the box to earn the decisive penalty.

That allowed Sigurdsson to stroke his spot-kick home for his second goal of the season.

The Icelandic midfielder has been overshadowed by Rodriguez’s arrival in the summer and has found chances limited. But, wearing the captain’s armband, he took his opportunity to impress and teed up efforts for Richarlison and Mina, who were both wasteful.

Calvert-Lewin, who was a menace on the counter-attack, also won a second penalty when he was caught by Ben Chilwell, but the England striker was ruled offside in the build-up.

Everton’s problem in recent games has been their defending, which has not been helped by injuries to captain Seamus Coleman and Lucas Digne. Against Chelsea, their back four was comprised solely of centre-backs.

But after a mixed campaign, Pickford showed the watching supporters his capabilities by producing several saves in quick succession to deny James twice and Kurt Zouma.

That seemed to boost the fans and the defence, who were under pressure for much of the second half and held out for a first clean sheet since the opening weekend of the season.

It was a welcome filip for former Chelsea manager Ancelotti, who got a measure of revenge for a crushing defeat last season.

“We needed this performance and the points after a difficult period,” the Italian added. “We lost a little of bit of our confidence, a bit of our attitude.

“Tonight we won for the spirit, not the quality of the play, we didn’t have the ball a lot, but we defended really well.”

Chelsea took time to integrate their summer signings, which topped £200m, but after their recent form, it looks as though they have started to click.

Chief among them has been Mendy, who replaced the often hapless Kepa Arrizabalaga in goal and provided much-needed assurance behind a newly-formed back four.

So it was a genuine surprise when his reckless challenge on Calvert-Lewin led to Everton’s opening goal.

In the Senegalese’s defence, he had just recovered from a fall moments earlier when he landed heavily and collided with James as he collected a deep free-kick.

But after conceding two goals in seven Premier League games prior to this match, it was still an uncharacteristic error and summed up Chelsea’s evening.

Lampard said it provided a dose of reality to those who say his side can win the league.

“It is a long season and these people talking about us winning the league with the best squad, it is ridiculous,” he said.

“You have to look at the teams winning it the last three or four years, they have wingers, strikers scoring 30 or 40 goals. There are squads who have won leagues and Champions Leagues, and we are clearly not that.”

After a methodical start, going behind kicked Chelsea into gear, with James chief among those attempting to score an equaliser.

His free-kick was stopped by Pickford, and then he watched in disbelief as his low shot against the post skidded across goal.

For all Chelsea’s attacking talents, that was as close as Lampard’s side came to scoring, with Mount smacking the outside of the frame with a late effort.

Olivier Giroud failed to continue his recent fine form and at times was left isolated by team-mates Kai Havertz and Timo Werner.

It was a game where Chelsea missed the spark of injured wingers Christian Pulisic and Hakim Ziyech.

Yet, given only Liverpool have scored more than Chelsea’s 25 league goals this season, the fact they did not register a shot on target after Zouma’s effort in the 28th minute will be of disappointment to Lampard.

“We have players who are new to the Premier League and young, so we are in a position where nights like this may happen,” the Chelsea boss added. “I don’t like them but that’s the challenge for us, to make sure we bounce back.”

Everton travel to face Leicester on Wednesday (18:00 GMT) while Chelsea have an away trip at Wolves on Tuesday (18:00).

Billy Gilmour (Chelsea) wins a free kick in the defensive half.

Billy Gilmour (Chelsea) wins a free kick in the defensive half.

Offside, Everton. Allan tries a through ball, but Jonjoe Kenny is caught offside.

Attempt blocked. Michael Keane (Everton) header from a difficult angle on the left is blocked. Assisted by André Gomes with a cross.

Richarlison (Everton) wins a free kick on the left wing.

Attempt missed. Olivier Giroud (Chelsea) right footed shot from the centre of the box is too high. Assisted by Timo Werner with a cross.

Mason Mount (Chelsea) hits the right post with a right footed shot from outside the box from a direct free kick.