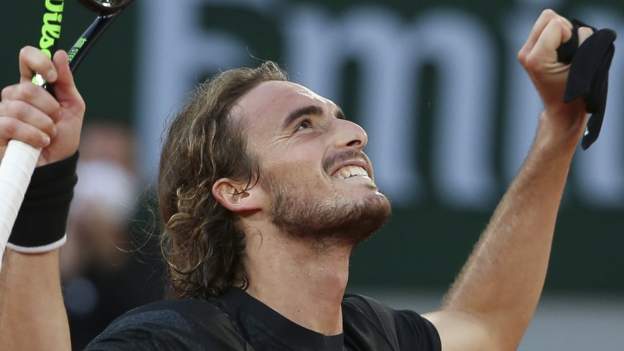 Stefanos Tsitsipas will attempt to strike another blow for the next generation when he plays world number one Novak Djokovic in Friday’s French Open semi-finals at Roland Garros.

The Greek, 22, would be the youngest man to reach a Grand Slam final in 11 years if he makes Sunday’s showpiece.

Victory would make Schwartzman only the third man to beat Nadal at the event.

Nadal lost to Sweden’s Robin Soderling and Serb Djokovic in 2009 and 2015 respectively, and withdrew prior to his third-round match in 2016 with a wrist injury.

Each of the 34-year-old Spaniard’s other campaigns, dating back to 2005, has ended with him lifting the trophy.

However, Schwartzman beat Nadal in straight sets on the clay in Rome last month, a result that both admit could have a bearing on Friday’s contest.

“If I see the history, I’m not sure if I’m going to have a lot of confidence. But I know that I can beat him. That’s the important thing, ” said Schwartzman, who knocked out US Open champion Dominic Thiem in an energy-sapping five-set quarter-final match.

“He’s coming with big confidence,” said Nadal, who has yet to drop a set in Paris this year and is bidding for a 20th Grand Slam title.

“He’s in the final in Rome, he’s in the semi-finals here. He beat me there. It’s a plus of confidence for him. I know that.”

Top seed Djokovic, who has won 17 Grand Slam titles, has lost only one of his 37 matches in 2020. That solitary defeat was via disqualification in the last 16 of the US Open when the 33-year-old accidentally struck a line judge with a ball hit in frustration.

That loss apart he was won titles in Dubai, Cincinnati and Rome in the wake of his Australian Open victory. His victory in the United Arab Emirates came via a 6-3 6-4 defeat of Tsitsipas in the final.

Djokovic called for medical assistance in his quarter-final win over Pablo Carreno Busta in Paris, but his Spanish opponent later questioned whether he was actually physically hurt.

Tsitsipas insists he is going into the match presuming Djokovic is at full fitness.

“An injury is not going to play a part in anything,” he said.

“I have to play the way I have to play. I’m approaching that match with the same intensity and the same focus that I’ve been doing the last few matches.”

Should he win, Tsitsipas would be the youngest player to feature in a Grand Slam final since a 20-year-old Juan Martin del Potro won in New York in 2009.

However, there are signs that the older generation’s stranglehold on the game may be weakening with 27-year-old Dominic Thiem beating 23-year-old Alexander Zverev to win his first Grand Slam last month.

Follow live radio and text commentary of both matches on BBC Radio 5 Live Sports Extra and the BBC Sport website and app.

Analysis and opinion from the BBC’s tennis correspondent.

How to get into tennis – it’s fun, will keep you fit and caters for all levels and abilities. Find your nearest court and learn the basics with our guide.

Get the latest tennis headlines sent straight to your phone, sign-up to our newsletter and learn where to find us on online.