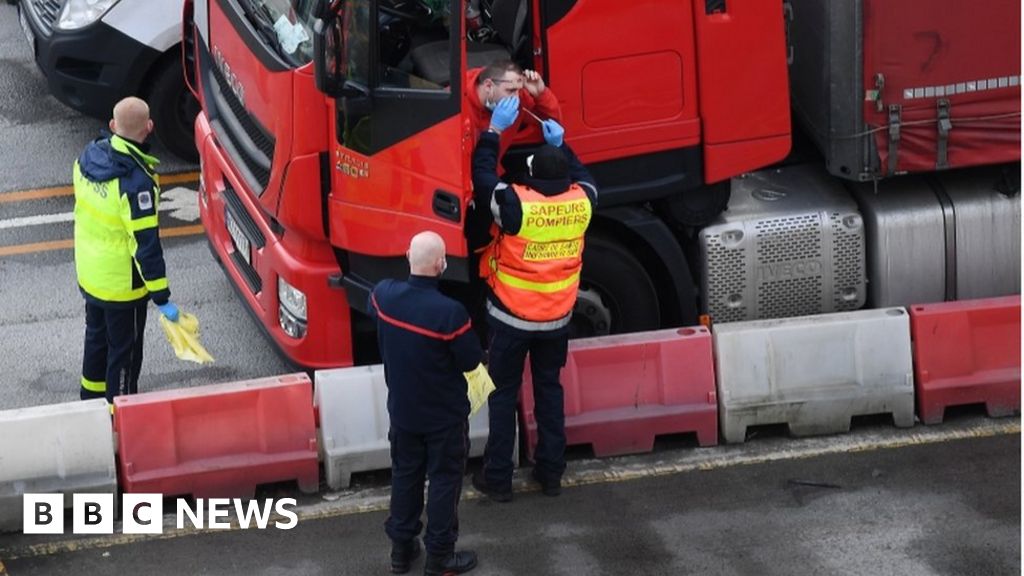 Thousands of lorry drivers waiting to cross the English Channel to France are spending Christmas Day in their cabs in Kent.

Hundreds of military personnel have been deployed to help clear the backlog of about 5,000 lorries, which are waiting at Manston Airport.

Drivers are allowed to travel on the condition they test negative for Covid-19 before boarding a train or ferry.

He said out of those lorry drivers who had been tested, 24 were positive for coronavirus.

Thanks to all the hauliers in #Kent for their patience & to everyone on the ground working tirelessly to help after the French border was suddenly closed.Over 10,000 tests have taken place & over 4,500 HGVs are back over the Channel. 🚚@DefenceHQ working to keep things moving pic.twitter.com/JVcEHd7vRQ

France closed its border after the UK warned of a fast-spreading variant of coronavirus but ended its ban on Wednesday, providing people tested negative before travelling.

More than 700 hauliers have been cleared for departure since France reopened its border.

But about 5,000 remain unable to get home and are waiting at Manston Airport, on a closed section of the M20, and in Dover.

French firefighters have been supporting the testing effort, and a group of Polish medics was deployed to the UK on Thursday to help test drivers. the Polish news website TVN24 has reported.

Some lorry drivers have already spent nearly a week stranded following the closure of the border on Sunday.

Mr Shapps said: “We need to get the situation in Kent, caused by the French government’s sudden imposition of Covid restrictions, resolved as soon as possible.

“I know it’s been hard for many drivers cooped up in their cabs at this precious time of year, but I assure them that we are doing our utmost to get them home.”

The government said catering vans were providing hot food and drinks to stranded hauliers at Manston, with Kent Council and volunteer groups providing refreshments to those stuck on the M20.

HM Coastguard said its teams in the Dover area had so far delivered 3,000 hot meals, 600 pizzas, 2,985 packed lunches and 17 pallets of water to those waiting.

Southeastern Railway and Network Rail arranged for food to be delivered to lorry drivers stuck in Operation Stack on the M20.

Seven trains carrying crates of food for the hauliers have left London in the past 48 hours, with the Salvation Army distributing the items.

There are more than 250 toilets at Manston, with a further 32 portable toilets added to existing facilities already along the M20.

A Port of Dover spokesman said ferry services had run throughout Christmas Eve night and would continue on Christmas Day to help ease congestion.

Duncan Buchanan, from the Road Haulage Association, said: “The most reassuring thing is that food is getting through at Manston, and I have to say a big thank you to everyone who volunteered to help.”

Or use this form to get in touch:

If you are reading this page and can’t see the form you will need to visit the mobile version of the BBC website to submit your comment or send it via email to HaveYourSay@bbc.co.uk. Please include your name, age and location with any comment you send in.

Kent lorry chaos: Truckers warned of Christmas in their cabs

MP’s ‘positive vibes’ as she prepares for radiotherapy