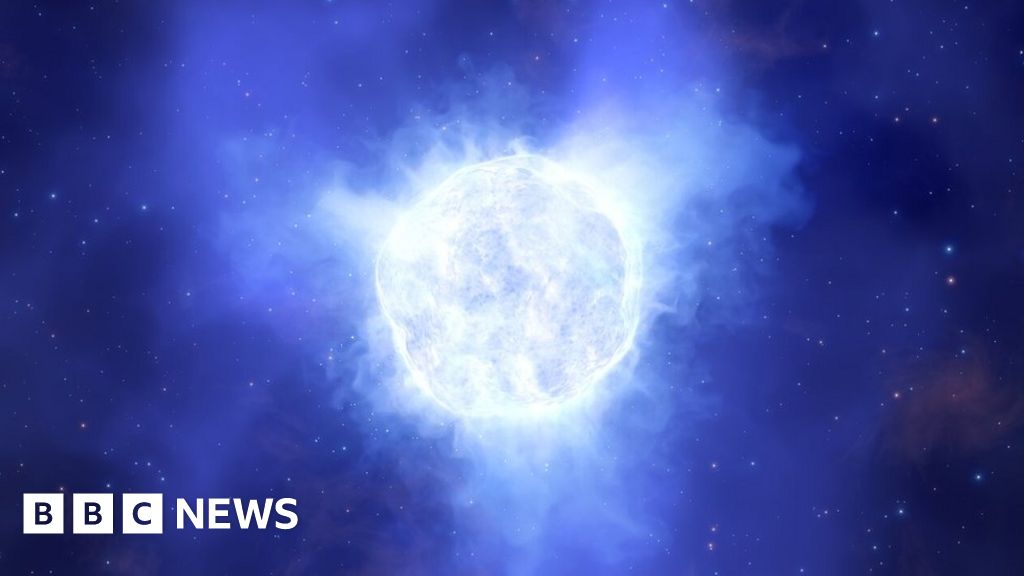 Astronomers have been baffled by the disappearance of a massive star they had been observing.

They now wonder whether the distant object collapsed to form a black hole without exploding in a supernova.

If correct, it would be the first example of such a huge stellar object coming to the end of its life in this manner.

But there is another possibility, the study in Monthly Notices of the Royal Astronomical Society reports.

The object’s brightness might have dipped because it is partially obscured by dust.

It is located some 75 million light-years away in the Kinman Dwarf galaxy, in the constellation of Aquarius.

The giant star belongs – or belonged – to a type known as a luminous blue variable; it is some 2.5 million times brighter than the Sun.

Stars of this kind are unstable, showing occasional dramatic shifts in their spectra – the amount of light emitted at different wavelengths – and brightness.

Between 2001 and 2011, various teams of astronomers studied the massive star, concluding that it was in a late stage of evolution. The Kinman Dwarf galaxy is too far away for astronomers to see its individual stars, but they can detect the signatures of some of them.

In 2019, a team led by PhD student Andrew Allan of Trinity College Dublin, Ireland, targeted the galaxy, with the aim of finding out more about how very massive stars end their lives.

But when they pointed the European Southern Observatory’s (Eso) Very Large Telescope (VLT) at it, they could no longer find the tell-tale signatures of the star.

Mr Allan commented: “We were surprised to find out that the star had disappeared!”

He added: “It would be highly unusual for such a massive star to disappear without producing a bright supernova explosion.”

The older observations seem to indicate that the star was experiencing giant eruptions, in which material is lost from the star. These are thought to have stopped sometime after 2011.

Luminous blue variable stars such as this one are prone to such outbursts over the course of their life. They cause the star to lose mass and lead to a dramatic peak in brightness.

Based on their observations and models, the astronomers suggest two explanations for the star’s disappearance and lack of a supernova.

The outbursts may have resulted in the luminous blue variable being transformed into a less luminous star, which could also be partly hidden by dust.

Alternatively, the team says the star may have collapsed into a black hole, without producing a supernova explosion.

This would be a rare event: our current understanding of how massive stars die suggests most of them meet their end in a violent nova.

If the black hole explanation is correct, says Mr Allan, “this would be the first direct detection of such a monster star ending its life in this manner”.

Co-author Jose Groh, also of Trinity College Dublin, commented: “We may have detected one of the most massive stars of the local Universe going gently into the night.”

Future studies are needed to confirm what happened to the star.

Eso’s Extremely Large Telescope (ELT) – expected to begin operations in 2025 – will be capable of resolving stars in distant galaxies such as the Kinman Dwarf, helping to shed more light on cosmic mysteries such as this one.