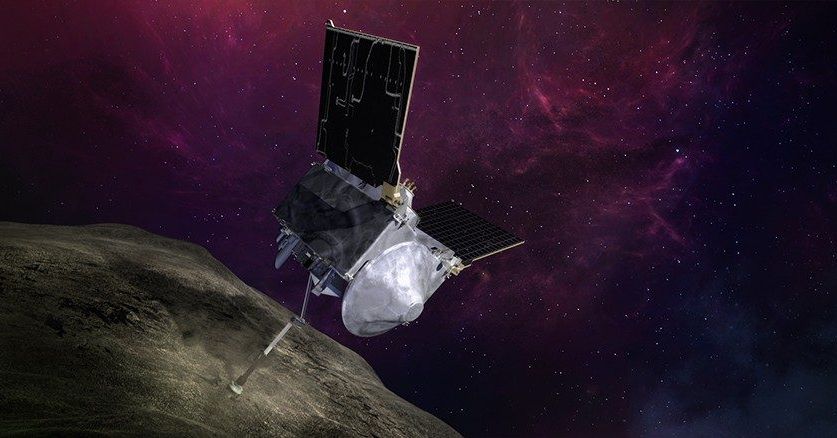 Now to start prepping for the return to Earth

NASA’s OSIRIS-REx spacecraft has successfully stored a small cache of rocks that it grabbed from the surface of an asteroid named Bennu last week, sealing the pebbles inside the vehicle’s belly. The asteroid particles will now remain inside the spacecraft over the next three years, as OSIRIS-REx makes its way back to Earth.

OSIRIS-REx grabbed the sample on October 20th of last week, more than four years after launching from Earth on its mission to touch an asteroid. Using a thin robotic arm, the vehicle lightly tapped the asteroid Bennu, stirring up rocks on the surface and pushing some of the pebbles up into the spacecraft.

While the maneuver worked as planned, OSIRIS-REx was a little too good at this sample grab. The vehicle wound up collecting a substantial chunk of asteroid rocks, some of which were fairly large in size. These beefier pebbles then jammed a flap at the end of the arm that was supposed to keep the material enclosed inside. With the flap stuck open, some of the asteroid particles started escaping out into space. Images of the sample collector showed tiny particles dancing and swirling as they headed out into the void.

I placed the collector head into the SRC on Tuesday evening… pic.twitter.com/s0nDXrY8BS

That discovery completely upended the mission team’s plans, as they raced to store the sample before more rocks floated out into space. Originally, the team had hoped to use this week to spin up the OSIRIS-REx spacecraft, measuring the vehicle’s momentum to find out just how much sample it had collected. But the engineers opted to cancel that, as the twirling could cause more rocks to escape. Instead, they decided to cut straight to storing the sample inside the main body of the spacecraft.

The storage process took a couple of days to complete, with the OSIRIS-REx team monitoring each maneuver the vehicle made and analyzing images taken by the spacecraft. Overall, it seems to have gone off just fine, and the collector is now properly secured inside of OSIRIS-REx. “We’re here to announce today that we’ve successfully completed that operation,” Rich Burns, the OSIRIS-REx project manager at NASA’s Goddard Space Flight Center, said during a press conference.

Unfortunately, the team doesn’t know for sure exactly how much material they stored since they had to cancel the spin maneuver. But they’re very confident that they grabbed more than what they hoped to grab. The OSIRIS-REx mission set a goal of snagging at least 60 grams of asteroid material from Bennu. Based on images taken of the robotic arm and the collector, the team members are confident they’ve grabbed at least 400 grams of material — if not more. The pictures only show about 17 percent of what’s inside the sample collector, according to Dante Lauretta, the principal investigator of the OSIRIS-REx mission at the University of Arizona. They estimate there are 400 grams in just that 17 percent of space alone, which means it’s possible the spacecraft has more than a kilogram in its belly right now.

“So even though we have lost sample as a result of the mylar flap being wedged open, we are confident, I am confident, and this team is confident that we still have hundreds of grams of sample that we plan to bring back to the Earth,” Lauretta said.

Ultimately, we won’t know for sure until OSIRIS-REx comes back to Earth. The spacecraft is slated to leave the vicinity of Bennu in March and return to our planet in September 2023. Then, the spacecraft will jettison the sample and send it on course to Earth. A parachute will slow it down, ultimately allowing the sample to land in the Utah desert. Then the fun will begin, as scientists take the sample back into the lab to learn more about what really makes up the asteroid Bennu.