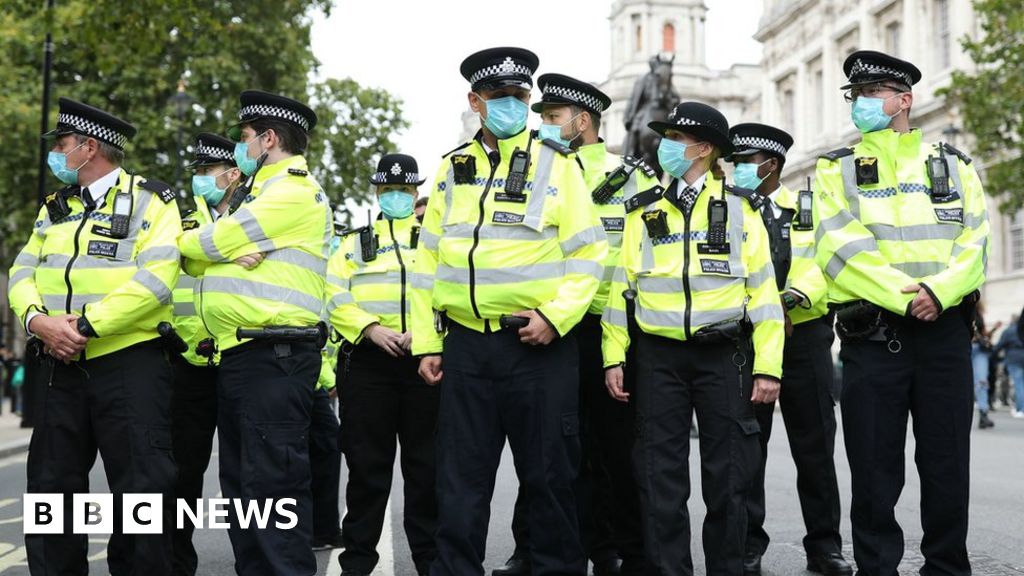 A survey of more than 40,000 police officers in England and Wales found that almost four in ten said they had been assaulted in the last year.

The research by the College of Policing also found 88% of officers said they had been assaulted during their career.

But police chiefs are investigating racial disparities in Taser use.

National Police Chiefs Council head Martin Hewitt, who commissioned the research, said he was shocked by the scale of the assaults and that a third of officers said they were unhappy with the personal safety training they received.

Police chiefs are calling for a new offence of targeting police officers with a vehicle, as well as for spitting and hate crimes to be considered as aggravating factors when suspects are brought to court.

Coughing and spitting incidents during the pandemic, protests and illegal raves have driven a rise in attacks in recent months, with provisional data showing attacks up 24% year-on-year in the four weeks to 7 June.

Home Secretary Priti Patel said the increase in assaults on officers was “simply unacceptable”, adding that the government was consulting on doubling the maximum sentence for assaulting an emergency worker to two years.

Che Donald, vice-chairman of the Police Federation of England and Wales, said officers and the majority of the public were “appalled by the atrocious levels of violence colleagues have faced recently” and police chiefs must take “swift action”.

The report found that 87% believed all frontline officers should have the option to deploy with Tasers. Three-quarters of police officers said that they personally wanted to carry a Taser.

At the moment, only around 17,000 of the 123,000 police officers in England and Wales are trained to carry the stun guns.

This major study of violence and policing reveals worrying disparities in the preparation given to officers – with some on the frontline receiving just a quarter of the training of colleagues elsewhere in England and Wales.

But one of today’s studies from the College of Policing reveals an apparent racial disparity in how officers themselves use force.

The study of more than 45,000 incidents across 16 forces looked for patterns in when officers resort to force – including Tasers – when detaining suspects.

It found that the odds of officers drawing equipment or weapons, but not using them, was higher when the suspect was identified as black.

The research also found that white suspects were in fact more likely to end up injured. The upshot is that the data doesn’t answer all the questions about the apparent racial disparities – as it also indicates that other factors may be influencing decisions to use force, such as mental illness.

Chiefs have ordered more research into this very complex area – because they don’t know why these disparities exist – and therefore it’s not clear how to minimise them.

Kent Chief Constable Alan Pughsley, the NPCC lead on officer safety, said that Tasers are “fallible” and officers should not be “over-reliant” on them.

Almost all officers said they thought Tasers were “very effective” or “fairly effective” but research into the use of the weapons found that although drawing a Taser may act as a deterrent, assaults and injuries were no more or less likely when they were carried.

Figures show Tasers and other “less lethal” weapons are more likely to be used against black people, and the NPCC is commissioning research to find out why.

The ban on households mixing in indoor settings will be enforceable by law and subject to fines.

Listen to the Mindful Mix on BBC Sounds