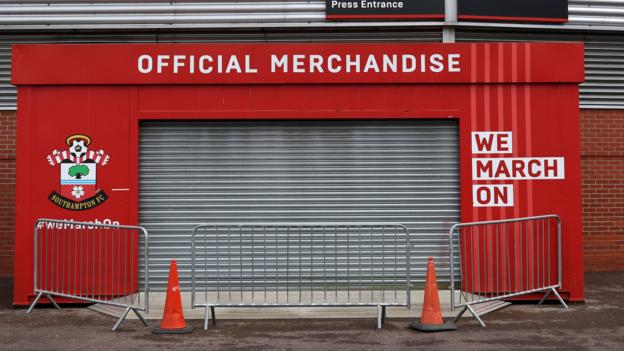 Southampton’s chief executive has suggested Premier League matches could be on television every day while people are still confined to their homes because of the coronavirus outbreak.

Martin Semmens says the return of the top flight – currently suspended until at least 30 April – would be “a sign that the country is coming back to normal” but it should not happen before it is safe.

“We have to do what is right and safe for the general public,” he told BBC Radio Solent.

“When everybody is safe and we’re not using up NHS and police resources, the government would like us to get back to playing because we are entertainment and a sign that the country is coming back to normal.

“If people are home for another month and Premier League football is on the TV every day that can only be a good thing. Not because we are more essential than the NHS but because we can give people entertainment and show that we’re fighting back.”

Semmens said teams are hopeful of completing the league by the end of June but did not yet know when play would resume.

Some players will be out of contract on 30 June, but Semmens believes players could be convinced to stay for longer should play continue beyond that point.

“We hope to get the league done by the end of June,” Semmens added. “As soon as you go past that date, there are legal challenges.

“If we ended up playing until 15 July and you had to extend a player’s contract by two weeks, convincing a player to play two more weeks of football and get paid nicely to do it – I don’t believe that will be a substantial challenge.

“The challenge is making sure we don’t have a knock-on effect to other seasons and make football compromised for years to come.”