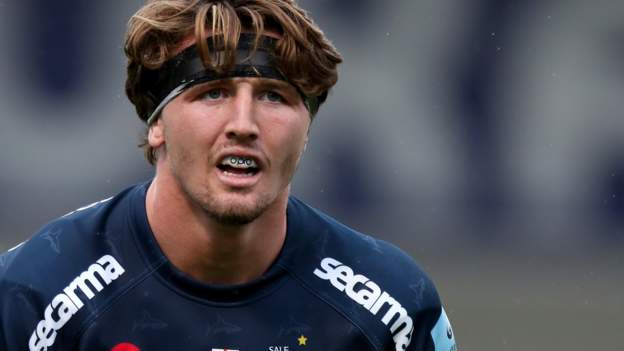 Marland Yarde’s try out wide, created by Faf de Klerk’s wraparound play, was one of few highlights in a first-half Sale edged 10-3 on the scoreboard.

Charlie Atkinson’s solo break and Tom Cruse’s close-range surge either side of AJ MacGinty’s Sale penalty turned the scoreline round for the visitors.

Lima Sopoaga’s boot added to the lead but Yarde’s try made for a nervy close.

The only sour note for Wasps was the serious-looking injury to wing Zach Kibirige, who injured himself chasing a hack downfield and had to be withdrawn after a lengthy stoppage.

Likewise, battering-ram back-rower Alfie Barbeary was the catalyst for much of their attacking energy, forcing a turnover and offloading for Cruse’s try, before limping off in the second half with an ankle problem.

Both coaches will have bemoaned execution levels, particularly at the line-out, where good ball was wasted – but Wasps made the most of premium chances to secure the win at the AJ Bell Stadium.

The departure of Steve Diamond earlier this month marked the end of an era at Sale, and Deacon has suffered two European defeats since taking the coaching reins.

Former Great Britain and England rugby league international Deacon was as sharp an attacking mind as any in his illustrious career, but his side did not produce enough moments of brilliance despite making a game of it late on.

That said, he would have been proud of the skills which brought about the two tries; notably Tom Curry’s hard line and blind offload timed to the fingertips of South Africa playmaker de Klerk, who released the left-edge attack for Yarde to stampede in to score his opener.

“Inconsistency has hit us again. It was a really poor second-half performance from us and this is what happens. There were too many unforced errors out there. That’s uncharacteristic I think from this squad, but that’s what has cost us the game in the end.

“There are definitely some things out there that we need to fix. Individually the lads need to improve, but they know that. There also seems to be an issue with mindset with some of them. Some of the decision-making isn’t always there, and wasn’t again today, and we do need to be a bit more clinical when we’re on top.

“Maybe it’s more of the mental side that we need to look a bit closer into things, but we’ll keep going and working hard.”

“I’m really pleased with the win. I’d just given the players seven days off as we were looking at a nine-day turnaround, so that was a massive gamble.

“A huge pat on the back to all the players, especially given their second-half performance. The lads were excellent. If Sale had scored first in the second half the outcome might have been a bit different. We would have been looking at a real uphill battle if that had happened.”

On the injury to Kibirige:

“I’ve spoken to Zach and he seems OK. He’s still on the bed, but I would reckon that within a couple of hours he should be fine, all being well.

“He was knocked out cold, and that’s never nice for anyone to see. But all the early indications point towards a good recovery, so of course everyone is happy about that.”