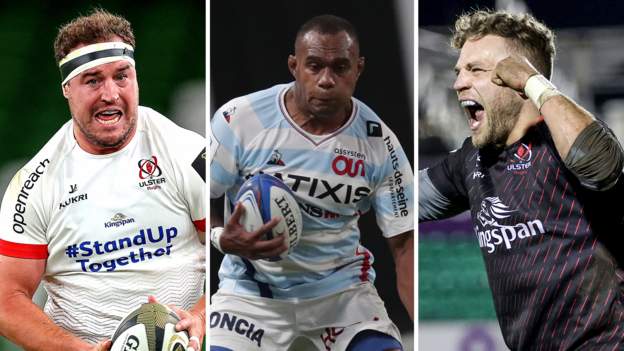 Fiji international lock and back row Leone Nakarawa has signed a one-year deal with Pro14 side Ulster.

Nakarawa, 32, will move to Kingspan Stadium after ending his second stint at Glasgow Warriors at the conclusion of the season.

The former European Player of the Year made his senior breakthrough with Glasgow in 2013 before moving to Racing 92 in 2016.

The arrival of versatile forward Nakarawa is a boost for Ulster after the high-profile departure of South African back row Marcell Coetzee.

Nakarawa made his Glasgow debut in 2013 and became a fan favourite at Scotstoun after a man-of-the-match performance in the 2015 Pro14 final victory over Munster in Belfast.

The Fijian, who won Olympic gold in 2016, joined Racing 92 at the end of the 2015-16 season and was named European Player of the Year at the end of his second campaign with the Parisian club, scoring 23 tries in 86 games over his time in France.

He returned to Glasgow in January 2020, departing Racing after the conclusion of the Rugby World Cup, but has found game time limited after sustaining a knee injury last February.

“It’s an exciting time for Leone to be making the move to Ulster for the upcoming season as we look to continue to build on our ambitions as a squad,” said Ulster head coach Dan McFarland.

“Given his broad skillset and experience, as well as some impressive accolades to his name, I’m confident that he’ll be a valuable addition to the team, and we look forward to welcoming Leone to the province.”

Hooker Herring arrived in Belfast in 2012 after a season with London Irish. He made his Ireland debut in 2014 under Joe Schmidt and is now a regular in the international set-up.

Herring, 29, was named Ulster captain for the 2016-17 campaign and is on the brink of 200 appearances for the province.

Fly-half Madigan joined Ulster in the summer of 2020 on an initial one-year-deal after spells with Leinster, Bordeaux Begles and Bristol Bears.

The 31-year-old has earned 30 Ireland caps and won the Six Nations in 2014 and 2015 before featuring at the World Cup later that year.

Curtis Allen scores twice for Coleraine for the second time in four days as a 2-1 win over Warrenpoint Town moves the Bannsiders into second place in the league.

The GAA’s Congress accepts a ‘split season’ model which will see the All-Ireland Hurling and Football Finals played by the middle of July.