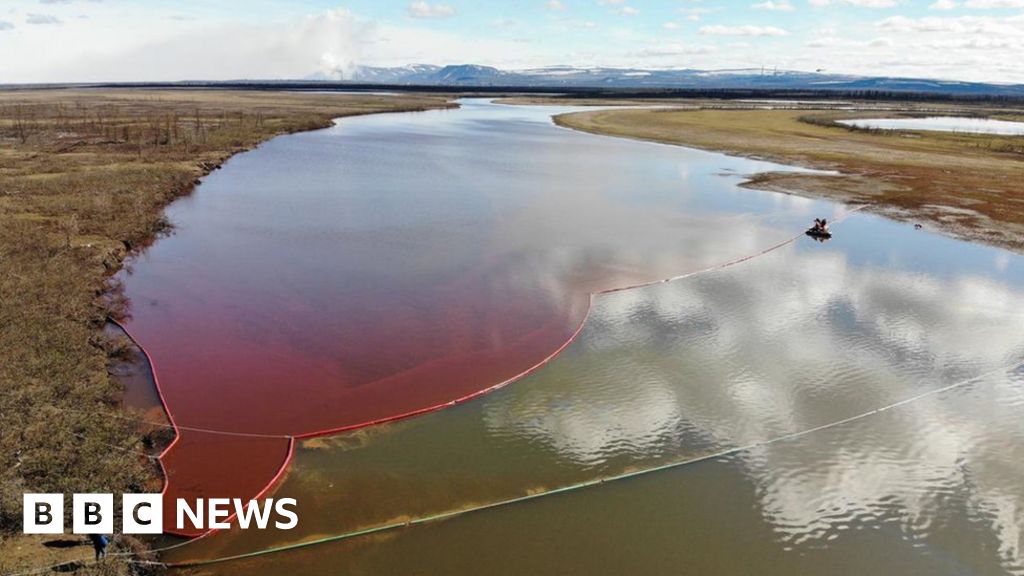 Russia’s President Vladimir Putin has declared a state of emergency after 20,000 tonnes of diesel oil leaked into a river within the Arctic Circle.

The spill happened when a fuel tank at a power plant near the Siberian city of Norilsk collapsed last Friday.

The power plant’s director Vyacheslav Starostin has been taken into custody until 31 July, but not yet charged.

The plant is owned by a subsidiary of Norilsk Nickel, which is the world’s leading nickel and palladium producer.

The Russian Investigative Committee (SK) has launched a criminal case over the pollution and alleged negligence, as there was reportedly a two-day delay in informing the Moscow authorities about the spill.

Ground subsidence beneath the fuel storage tanks is believed to have caused the spill. Arctic permafrost has been melting in exceptionally warm weather for this time of year.

President Putin expressed anger after discovering officials only learnt about the incident on Sunday.

Russian Minister for Emergencies Yevgeny Zinichev told Mr Putin that the Norilsk plant had spent two days trying to contain the spill, before alerting his ministry.

The leaked oil drifted some 12km (7.5 miles) from the accident site, turning long stretches of the Ambarnaya river crimson red.

In a televised video conference on Wednesday, Mr Putin criticised the head of the company over its response.

“Why did government agencies only find out about this two days after the fact?” he asked the subsidiary’s chief, Sergei Lipin. “Are we going to learn about emergency situations from social media?”

The region’s governor, Alexander Uss, had earlier told President Putin that he became aware of the oil spill on Sunday after “alarming information appeared in social media”.

In a statement, Norilsk Nickel said the incident had been reported in a “timely and proper” way.

The state of emergency means extra forces are going to the area to assist with the clean-up operation.

The accident is believed to be the second largest in modern Russian history in terms of volume, an expert from the World Wildlife Fund, Alexei Knizhnikov, told the AFP news agency.

The incident has prompted stark warnings from environmental groups, who say the scale of the spill and geography of the river mean it will be difficult to clean up.

Greenpeace has compared it to the 1989 Exxon Valdez disaster in Alaska.

Oleg Mitvol, former deputy head of Russia’s environmental watchdog Rosprirodnadzor, said there had “never been such an accident in the Arctic zone”.

It is not the first time Norilsk Nickel has been involved in oil spillages.

In 2016, it admitted that an accident at one of its plants was responsible for turning a nearby river red.

Minister of Natural Resources Dmitry Kobylkin warned against trying to burn off such a vast quantity of fuel oil.

He proposed trying to dilute the oil with reagents. Only the emergencies ministry with military support could deal with the pollution, he said.

Barges with booms could not contain the slick because the Ambarnaya river was too shallow, he warned.

He suggested pumping the oil on to the adjacent tundra, although President Putin added: “The soil there is probably saturated [with oil] already.”

🤯🤯🤯🥺🥺🥺😱😱😱#амбарка #чп #россия #Норильск #нефть #природа #краснодарскийкрай #новоросс #Новороссийск #nvrsk #река #москва #питер #nature #moscow #рыбалка #fishing #fish #спиннинг #sos #help #russia #всемвсем #внисание #черезвычайноеположение #краснодар#самара#владивосток#урал May 29 at the Nadezhdinsky plant owned by OAO GMK Norilsk Nickel, there was a spill diesel fuel in the soil and the water got more 21 thousand tons of oil products. This is the first accident such a large scale in the polar Arctic. In the country declared a state of emergency at the Federal level. The disaster in Norilsk showed irresponsible attitude of large companies to our nature, this will not continue it can! Environmental control should be enhanced, and the operation of facilities should take place under special control for warnings accidents, especially in the conditions of melting eternal permafrost due to global climate change. I however the opposite is happening now the situation in which Industrialists seek a moratorium on certain environmental restrictions requirements under the pretext of fighting economic crisis. We need to prevent the destruction of our nature and force the Russian Government to go on the way to support new green technologies and fight climate change and don’t go along with it the “dirty” business. @greenpeaceru @greenpeace