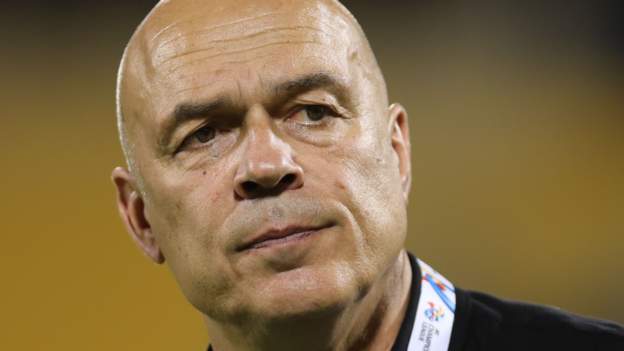 Former Tottenham boss Christian Gross has been appointed as Schalke’s fourth coach of a miserable season so far.

The 66-year-old, who left Saudi Arabia’s Al-Ahli in February, arrived at Tottenham in November 1997 but lasted less than 10 months.

Schalke, bottom of the German Bundesliga after 13 games, have already been managed by David Wagner, Manuel Baum and Huub Stevens this season.

“I want to feel the players’ enthusiasm at all times,” said Gross.

“I will give everything so that we can accomplish our goals together.”

The Swiss has been appointed on a contract until the end of the season.

Schalke have taken only four points so far and are six points adrift of Arminia in 16th, the relegation play-off spot.

Gross replaces interim boss Stevens, who was appointed after the sacking of Baum earlier this month.

Baum had himself replaced former Huddersfield coach Wagner, who was fired in September.

Gross has enjoyed success in his native Switzerland, winning a total of six league titles during his time with Grasshopper Zurich and Basel.

Why Thomas Tuchel is likely to be a popular appointment in the Chelsea dressing room if he is named as the club’s new manager.

Bruno Fernandes hits a stunning free-kick to put Manchester United 3-2 up against Liverpool in the FA Cup fourth round.

Watch Tammy Abraham’s superb hat-trick against Luton Town as the England striker sends the Blues into the FA Cup fifth round.

Dominic Calvert-Lewin, Richarlison and Yerry Mina bag the goals while James Rodriguez and Andre Gomes tee them up as a strong Everton side breeze past Sheffield Wednesday.

Former England captain Michael Vaughan says Joe Root is one of the best players of spin he has seen after his 186 in the second Test against Sri Lanka in Galle.

Everton’s Thierry Small shows off the fiery skills that have made him a hot prospect in academy football. But can he beat Newcastle’s Bobby Clark to the top spot?

One of music’s rising stars brings you her mixtape