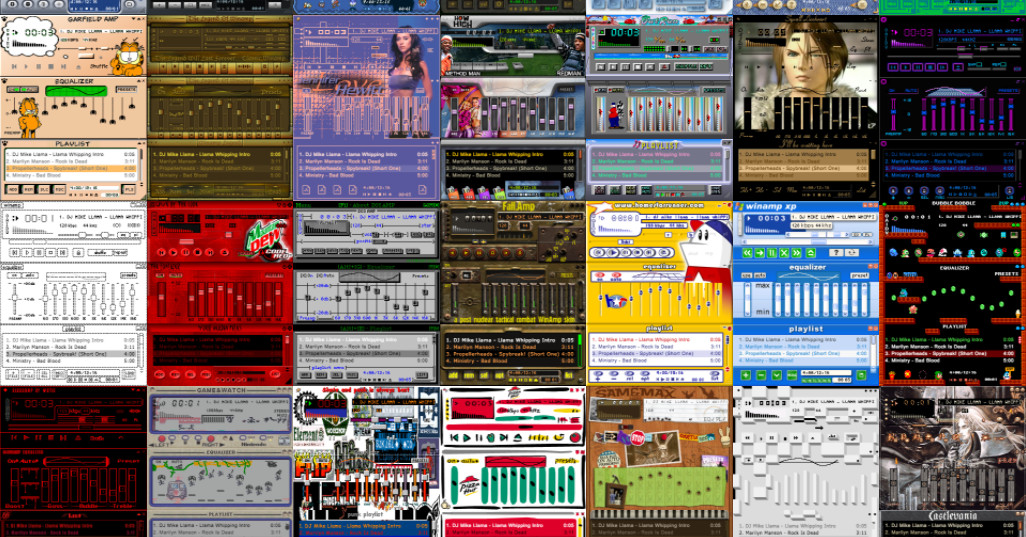 A glorious time when UIs were real UIs

Every now and again, individuals of a certain generation (my generation) have a tendency to fall into a catatonic state whenever we remember Winamp skins. There’s just something about them that instantly transports one back to the late ‘90s / early ‘00s, when user interfaces were truly customizable, and your music collection was an endless and engrossing battle against garbled filenames like LINKIN_PORK-IN%THE%END(HQ).mp3.

If any of that is triggering a nostalgic response, then you’ll probably enjoy the Winamp Skin Museum. It’s an endlessly scrolling collection of 65,000 Winamp skins, searchable and fully interactive. There’s a default playlist (which includes the “Llama Whippin’ Intro”), and you can even load audio files into it from your computer, if you happen to have any lying around.

He’s not wrong. The taste on display in the Winamp Skin Museum is, in a word, stunning. It has all of the artistic value of a national art gallery, but it focuses in on late-’90s / early-’00s aesthetics with enough raw energy to bring back nü metal.

On display, you can see anime skins, gaming skins, communist skins, sci-fi skins, skins dedicated to particular artists, and a cornucopia of indescribable vibes in between. The only disappointment is that the format of the museum doesn’t lend itself to supporting the stranger skins that transformed the size and shape of Winamp’s various elements. But perhaps that would have been too much for today’s modern, sleek UIs to handle.

This is the weird thing about Winamp skins, though: they don’t just capture a visual aesthetic, but a mode of interaction with technology. Personally, they remind me of an era when it felt like I had more control over my computer. I could customize Winamp skins, sure, but also my whole desktop, down to my extremely carefully collated music collection.

There was also something about having to sort through files and dig up album art that encouraged a sort of engagement with music that feels, to me, very different to today’s streaming model. Spotify, compared to Winamp, seems passive. You’ll get your Discover playlist, and you’ll like it. (And I do.) You could argue that we’ve traded into this chaotic customization for convenience. But was it worth it? Probably. Perhaps all I’m really missing is a period of my life when I had time and energy to mess about with that sort of thing. Arguably, computers are just as customizable, if you care to put in the effort.

But you see what I mean, now? Winamp skins, dude. They really take you back.