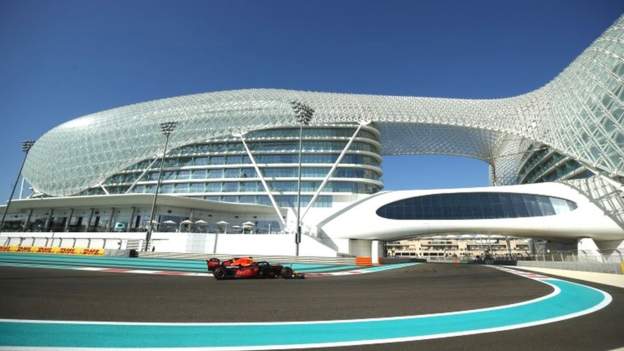 Verstappen was just 0.034 seconds quicker than Bottas. Lewis Hamilton, returning after missing the last race in Bahrain with coronavirus, was fifth.

Hamilton missed the first half of the session with a brake problem.

The world champion was 1.3secs off the pace and behind Renault’s Esteban Ocon and Red Bull’s Alexander Albon.

The first session at Abu Dhabi is notoriously unrepresentative because it takes place in the heat of the day, whereas qualifying and race are held at sunset, when track temperatures drop, affecting car performance.

Adding to the irrelevance of the headline lap times, Verstappen’s fastest lap was set on the fastest soft tyre, as were those of Ocon and Albon, while Bottas and Hamilton were running the hard, which is slowest over one lap.

It was a largely uneventful session, although Albon had a spin at the chicane of Turns 11 and 12, and Renault’s Daniel Ricciardo failed to set a lap time after stopping on track with a fuel-pressure problem.

Ferrari driver Charles Leclerc trialled a new floor in preparation for the 2021 season, when F1 is introducing rule changes that are aimed at slowing the cars to reduce the risk of tyre failures. A portion of the rear floor is cut away to reduce downforce.

Mick Schumacher, driving in this first session for Haas as a warm-up for his graduation to F1 for the US-based team, was 18th fastest, ahead only of his team-mate Pietro Fittipaldi.

Lando Norris was 13th fastest, two places behind his McLaren team-mate Carlos Sainz, while George Russell was 16th on his return to Williams after subbing for Hamilton in Bahrain last weekend.