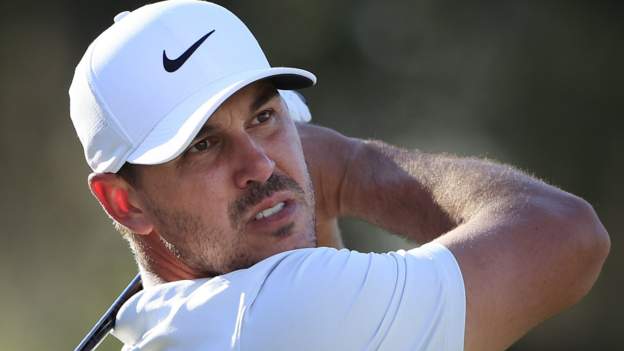 American four-time major winner Brooks Koepka holds a one-shot advantage after the second round at the WGC-Workday Championship at Concession, Florida.

Koepka, 30, carded a six-under-par 66 despite bogeying the 18th to stand 11 under for the tournament.

Rory McIlroy, bidding to complete a full set of World Golf Championship titles, is six shots off the pace.

First-round leaders Matthew Fitzpatrick of England and American Webb Simpson both managed 69s on Friday and are joined by Tony Finau at nine under.

Patrick Reed, the winner of the WGC-Mexico Championship in 2020, shot a second successive round of 68 to sit tied eighth, one shot further back, where he is joined by fellow American Kevin Kisner.

Northern Ireland’s McIlroy, 31, had a mixed second day, his round of 70 including a double bogey on the seventh, three bogeys and seven birdies to sit at five under.

Elsewhere, US Open champion Bryson DeChambeau responded to finishing five over on Thursday by carding a 64 – the day’s joint-best alongside Morikawa.

World number one Dustin Johnson, who ended the opening day alongside DeChambeu, improved to two over.

England’s Aaron Rai is two under, with compatriots Tyrrell Hatton and Lee Westwood both at one under. Justin Rose is level par, Scotland’s Robert MacIntyre is two over, while Laurie Canter and Tommy Fleetwood are a further shot back.

The year’s first World Golf Championship event in Bradenton has replaced the WGC-Mexico Championship, which was cancelled because of Covid-19 concerns.

Naga Munchetty travels across the country to find out

Rachael Blackmore says her Cheltenham Festival was “phenomenal” after becoming the first woman to be the leading jockey at the meeting.

Analysis and opinion from the BBC’s golf correspondent.

Get the latest golf headlines sent straight to your phone, sign-up to our newsletter and learn where to find us on online.

From hitting a few balls on the range or a quick nine holes, to the full 18 and tournaments – how to get into golf.